DLNA is a set of standards for home entertainment equipment to interoperate. The equipment can be hardware devices, but also software applications running on an ordinary computer. There are four types of DLNA devices according to the standard says Wikipedia (my explanations):

I will try to compile a list of open source software devices when I find them, with an emphasis on components, i.e. no listing of all-in-one solutions and a preference for software that runs on Linux and that is maintained. Although they most likely aren't certified, they interoperate via the DLNA protocol.

Gupnp is a project that provides components for upnp applications. One part of it is the gupnp control point. It gives "remote control" for upnp and dlna applications. It can be intstalled on e.g. Ubuntu 10.4 by using synaptic or apt-get, installing "gupnp-tools". 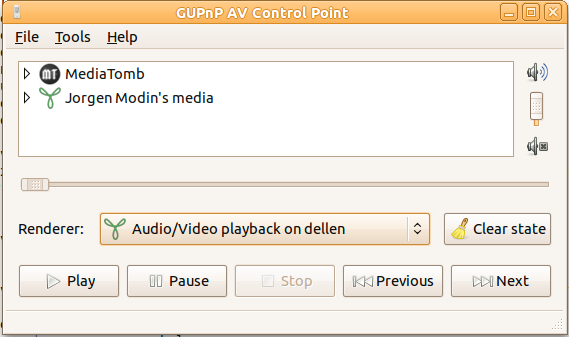 "Play" worked fine, "Next" and "Previous" did not work on my setup. Note Rygel logo in renderer selection field 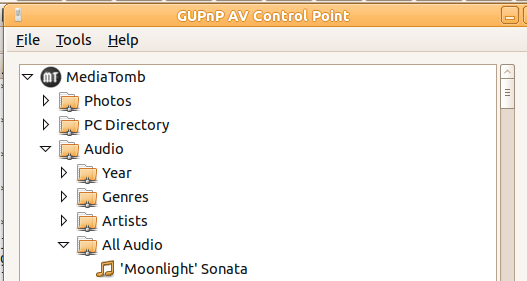 Selecting a file and clicking "Play", or just double clicking a file made it play

I have successfully remote controlled Rhythmbox Music Player, making it play, pause and skip, from a DMC. Tested on Ubuntu 9.10.

Media Tomb works as a

I have successfully played a video from Media Tomb through Totem. Media Tomb has a web userinterface where you can add all files that the user account has the right to, the media tomb database. This means that if you are running it under your own user, all your files may get exposed.  From the Media Tomb documentation:

The server has an integrated filesystem browser, that means that anyone who has access to the UI can browse your filesystem (with user permissions under which the server is running) and also download your data! If you want maximum security - disable the UI completely! Account authentication offers simple protection that might hold back your kids, but it is not secure enough for use in an untrusted environment!

Totem with the appropriate plugin

which means it can access and play media from media servers, but it does not advertise itself on the network, i.e. other dlna components cannot use Totem. It picks up Rhythmbox, Coherence:FSStore, Coherence:BBCStore and Media Tomb as mediaservers but not ushare, in my tests. upnp-inspector picks up all five. Tested on Ubuntu 9.10.

ushare works as a

ushare can be configured to only serve content from one folder. ushare 1.0 tested on CentOS 5. According to the web site ushare is currently not actively developed.

djmount is a gateway between the UPnP world and the Linux file system. It allows programs who do not handle UPnP but can handle local files, to access files from devices as if they were on the file system. djmount mounts itself on a mountpoint and presents each media server it finds in a subdirectory. It can even do searches. (djmount is currently untested by me).

Linn Kinsky Desktop seems to be an ambitious project with a unique interface for making a DLNA/UPnP control point, among other things. On my Ubuntu (tested December 2009) the text items of the UI do not show up and then the application crashes X. Maybe it works better on other platforms or will work better in upcoming releases. 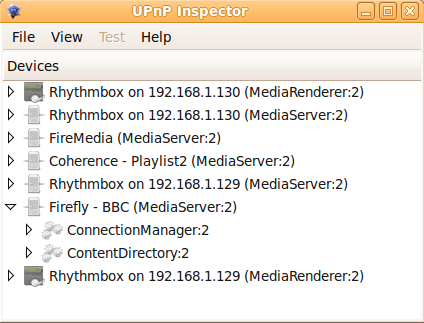 UPnP Inspector is a great tool for seeing what devices are on your subnet and what capabilities they have. If you are running Linux, check the repositories of your distribution for it, or if you are a pythonista, use easy_install or pip to install it. The Inspector is a part of Coherence (see text further down about Coherence).

Update: I just realised you can right click the devices in the tree, and you get a remote control for that device! 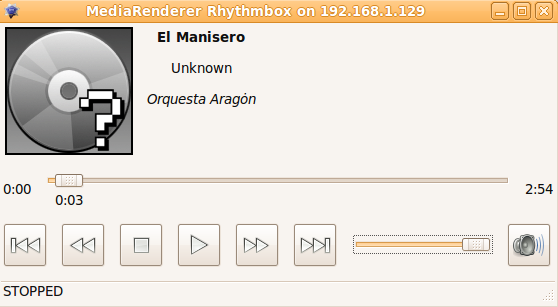 Not only that, but you can drag songs from a media server to a media renderer and it plays the song. Amazing. It may nullify the need for the remote play-next-pause devide that I've made.

Coherence is a server that runs a number of UPnP/DLNA devices for you. These devices, that come with Coherence,  are called "plugins". You can enable or disable plugins in a ".coherence" file in your home directory. The coherence framework can be installed on Ubuntu 9.10 in the normal way with apt-get or synaptic, and I suppose similar is true for other Linux distributions. Otherwise if you cannot find a ready made package for your OS, Coherence is a python project so if you are a python developer familiar with how to install python things, you can use easy_install, pip or even buildout.

You can try out Coherence by just typing "coherence" at the command line. I will list some of the plugins in Coherence below.

GMediastreamer is a pure media renderer. It has no concept of playlists and has no media database of its own. You need UPnP Inspector to give it files to play (by dragging them onto the UI of GStreamer in the inspector, hint: Right-click on the devices). It can then be controlled with the inspector or I guess any other digital media controller. Maybe there are or will emerge ways of providing it with a steady stream of files.

To enable GMediastreamer, put this in your .coherence file:

Change "MyPlayer" to whatever you want. Or keep the name :-)

FSStore is a media server that serves up a directory and its sub directories. It is useful outside of Coherence, you do not specifically need the UPnP inspector. Totem can play music and videos directly from it.

To enable FSStore, put this in your .coherence file:

Well, maybe you need to change "jorgen" to something else...

BBCStore and TEDStore are media servers just like FSStore, put pull their content from external sources, in this case BBC Radio and TED Talks respectively. I have tried BBCStore and it works fine. It is useful outside of Coherence, you do not specifically need the UPnP inspector. Totem can play programs directly from it.

To enable BBCStore, put this in your .coherence file:

Rygel is... I'm not sure what Rygel is from its web page or when installing it, but a friend installed it and he claims it is a working DLNA server.

Update 2011-November-04: The same friend now reports that rygel stopped working for him when upgrading to Ubuntu 11.10, and that he is now using minidlna instead to good effect.

Pulseaudio is an ambitious sound architecture which is installed by default on Ubuntu as of currently. Pulseaudo has many possibilities but is also widely disliked because of complexity and reliability issuues. In Pulseaudio I can now choose to output the music from one computer on the sound card of another, over TCP/IP. This means you can have one computer close to your amplifier, as a glorified wireless soundcard. I have only done preliminary tests, but is seems like the bandwidth of wireless 802.11g is not enough. while wired 1Gb/s Ethernet is. Would be interesting to check 802.11n and 100Mb/s wired Ethernet.

Leia Upnp Audio Control Point is a control point, that according to the web site can do a lot of interesting things. It runs on a variety of platforms. Unfortunately on my current platform (Ubuntu 10.10) Leia 0.5.8 (tested 2010-12-21) crashes when it encounters a DLNA device. If no devices are available on the subnet, it does not crash though, but is of course in that case of no utility. I hope they get it working on Ubuntu because it looks cool.

play-next-pause is my own try to make a simple remote control. It relies completely on the Coherence framework and was written largely from looking at the code of the UPnP Inspector. I have made two big binaries, one for Linux and one for Windows. These should have all dependencies included so you do not need to install Coherence, Twisted or GTK or anything else hopefully. The binaries weigh in at about 12MB which means they sport about 200KB per line of code (play-next-pause is about 55 lines of code) or about 2MB per button! This can surely be trimmed but hey, it works for me.